This custom built Suncrest home was constructed over a decade ago. The home was situated on high-side lot with beautiful views of the rolling Westmoreland County hills. As with many of our new construction clients, the front yard the primary focus as part of phase one. We included multiple, large landscape beds which flowed throughout the front of the property and perimeter of the governers driveway. These large beds allowed space for multiple plantings which created different textures and color throughout the seasons.

Five years after completing phase one, the homeowner contacted us to create a large outdoor living space. The living space included a Unilock Elements Fireplace flanked with wood boxes and custom seating wall; this created a courtyard atmosphere. A Unilock Copthorne paver detail was designed to create a throw rug effect for the dining table and outdoor seating around the fireplace. Unilock Umbriano pavers created an elegant look around the patio while providing durability for years to come, compared to a poured concrete product. A custom covered roof created some shade for the backyard which typically is in full sun all day.

Fencing was important to our client to keep small children and pets safe in the backyard. We installed six-foot custom columns between the aluminum fencing so they could view the rolling hills in the wood backyard. Solid vinyl fence was used on both sides of the property to create privacy.

Several years after this outdoor space installed, the homeowner contacted us to create a separate living space to be utilized from the side walkout basement. We complimented the existing living space with the same Unilock pavers and walls but created a wood-burning fire-pit for the family to enjoy throughout the seasons. At that time, we mentioned to our client that they had the perfect yard to incorporate a swimming pool and connect both living spaces. The homeowner was receptive to this idea possibly in the future.

Phase 3: Winter 2020
The homeowners contacted Beall’s and said they was ready to proceed with the pool installation. Our designers were excited to finish this amazing backyard and outdoor living space with a custom pool area and spa. A large, rectangular pool with an auto-cover was designed to include a spa which flowed into the pool. We utilized the same Unilock Brussels stone around the perimeter of the spa to compliment all of the other hardscape elements in the yard. A large bullnose limestone cap surrounded the top of the spa with undermount lighting to illuminate the perimeter in the evening. A shear descent waterfall was designed to appear as though the spa was spilling into the pool. In phase three, we also expanded the outdoor lighting in the backyard to compliment the new pool area.

One of the biggest challenges in this project were matching existing paver products that had been discontinued. We utilized a different paver (Unilock Boulivard) which had sleek edges similar to the Umbriano to contrast the color and highlight other colors in the landscape. The paver sidewalk was installed utilizing the same Copthorne paver in a herringbone pattern similar to the paver carpet details in the existing patio. 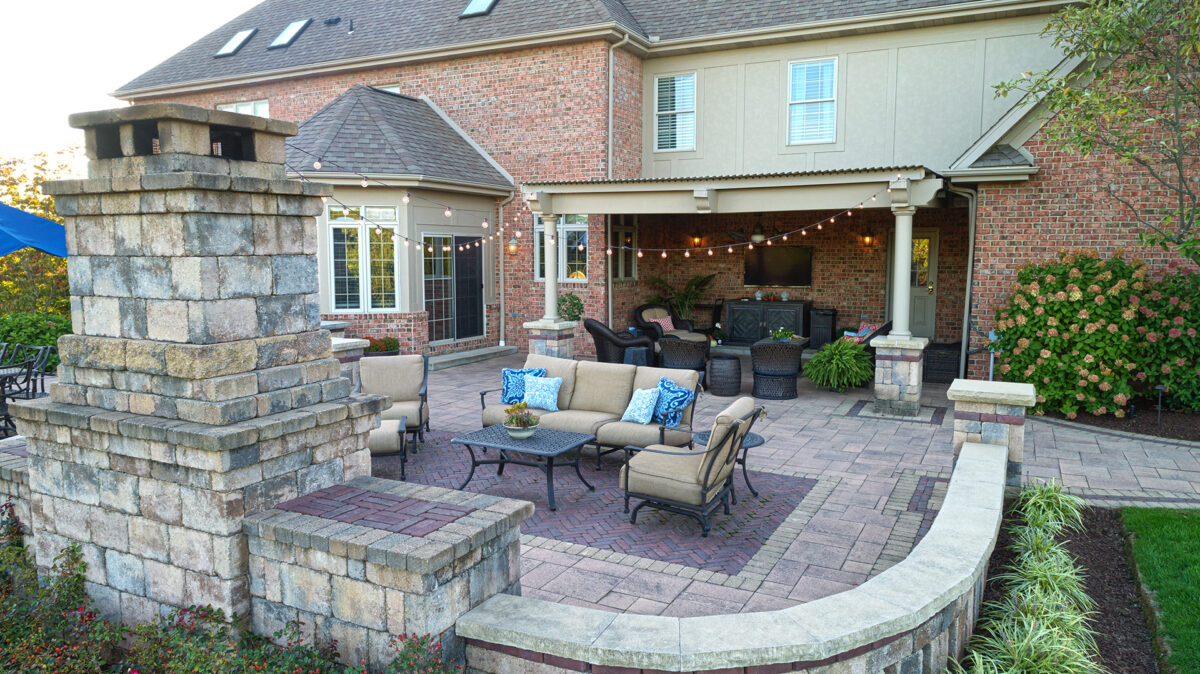 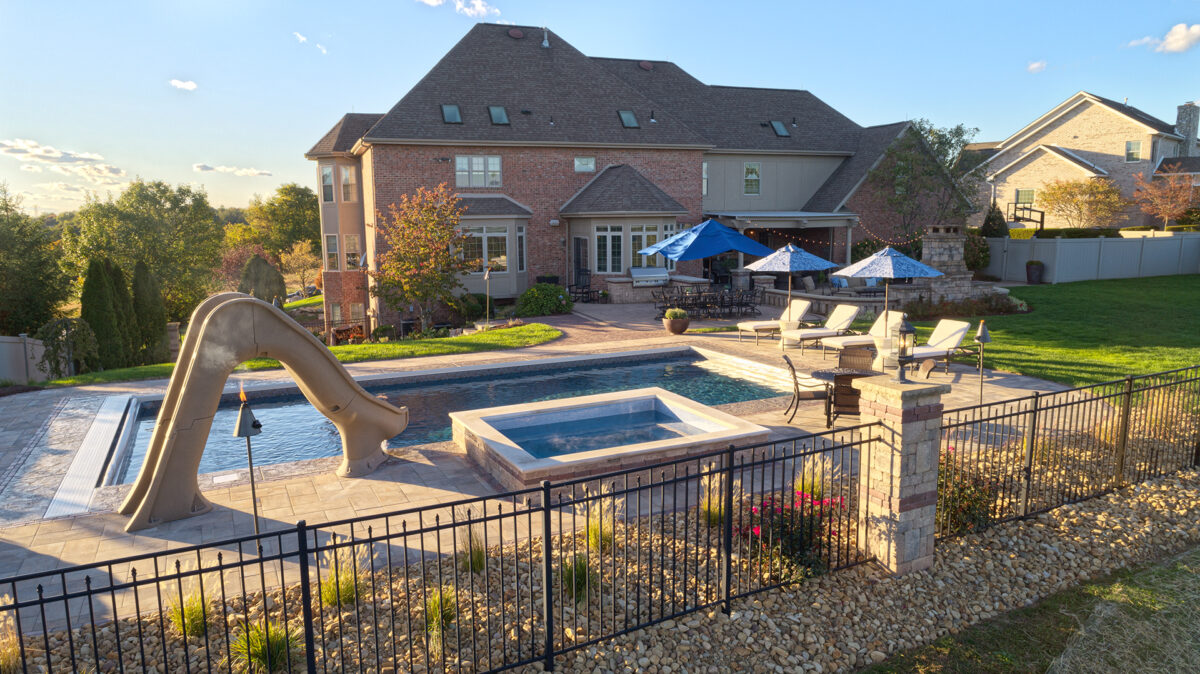 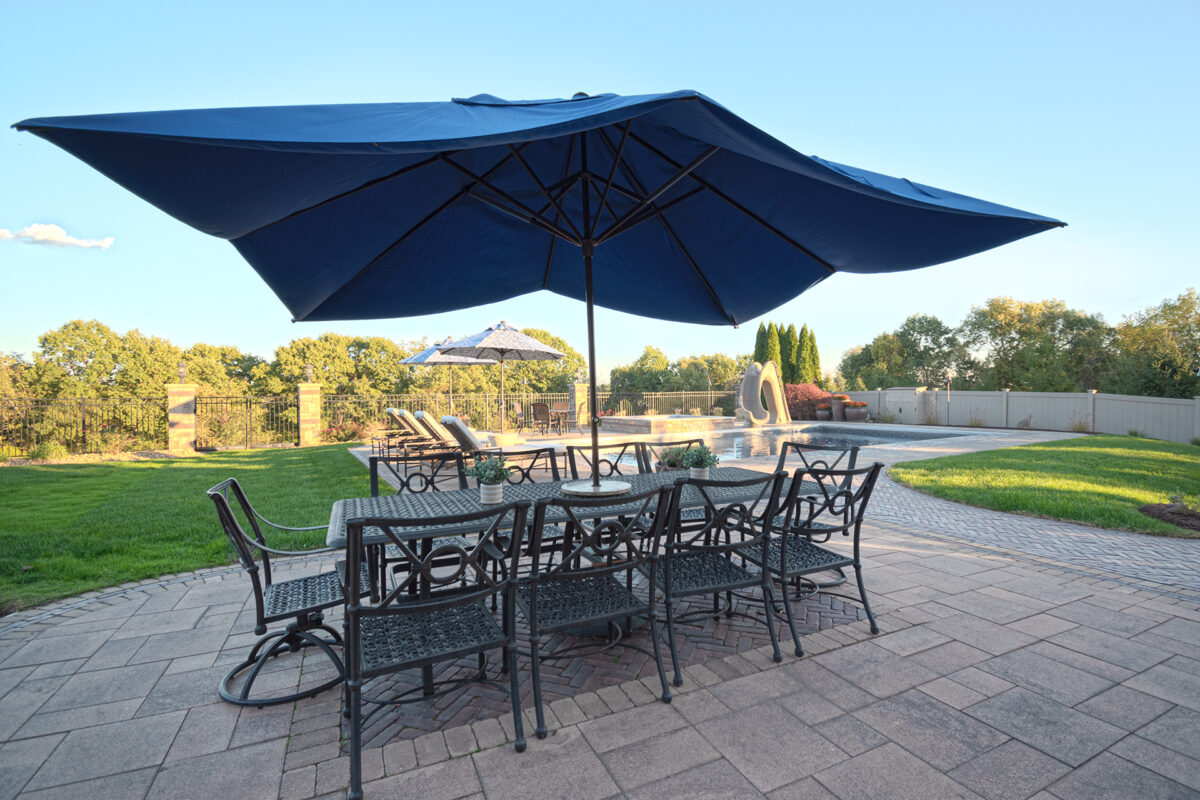 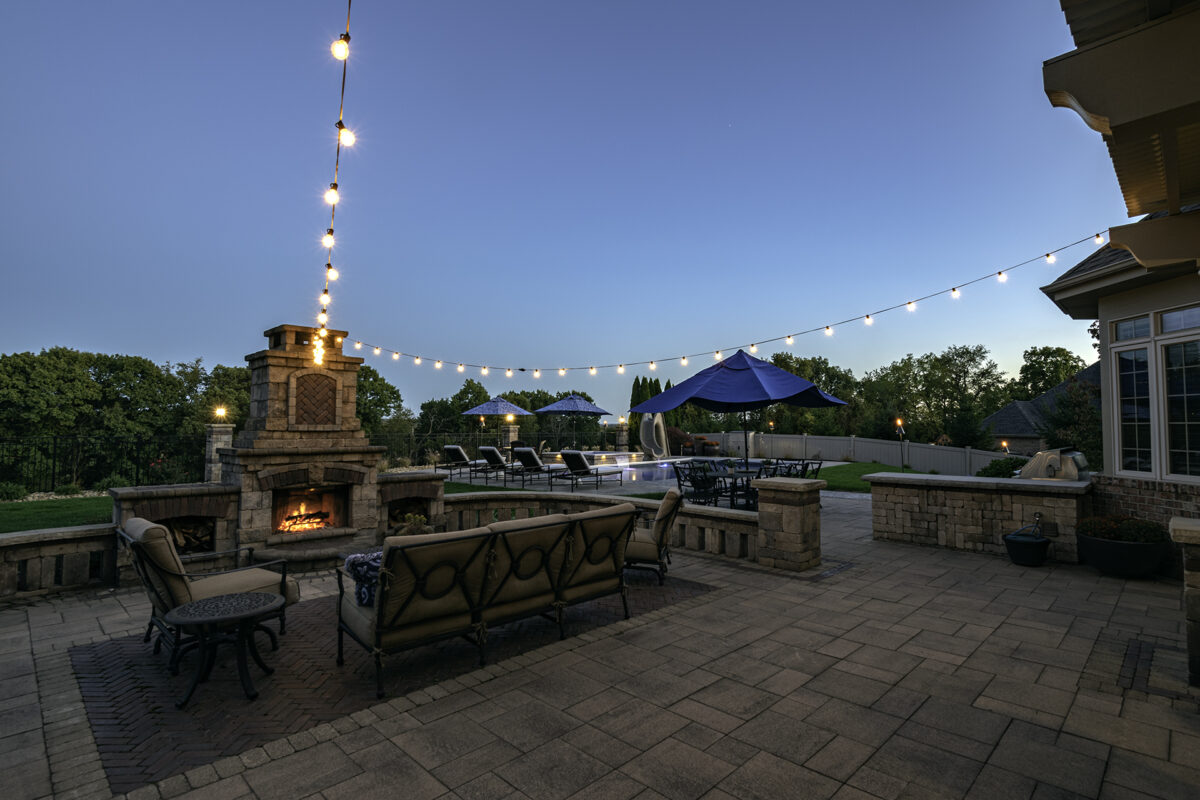 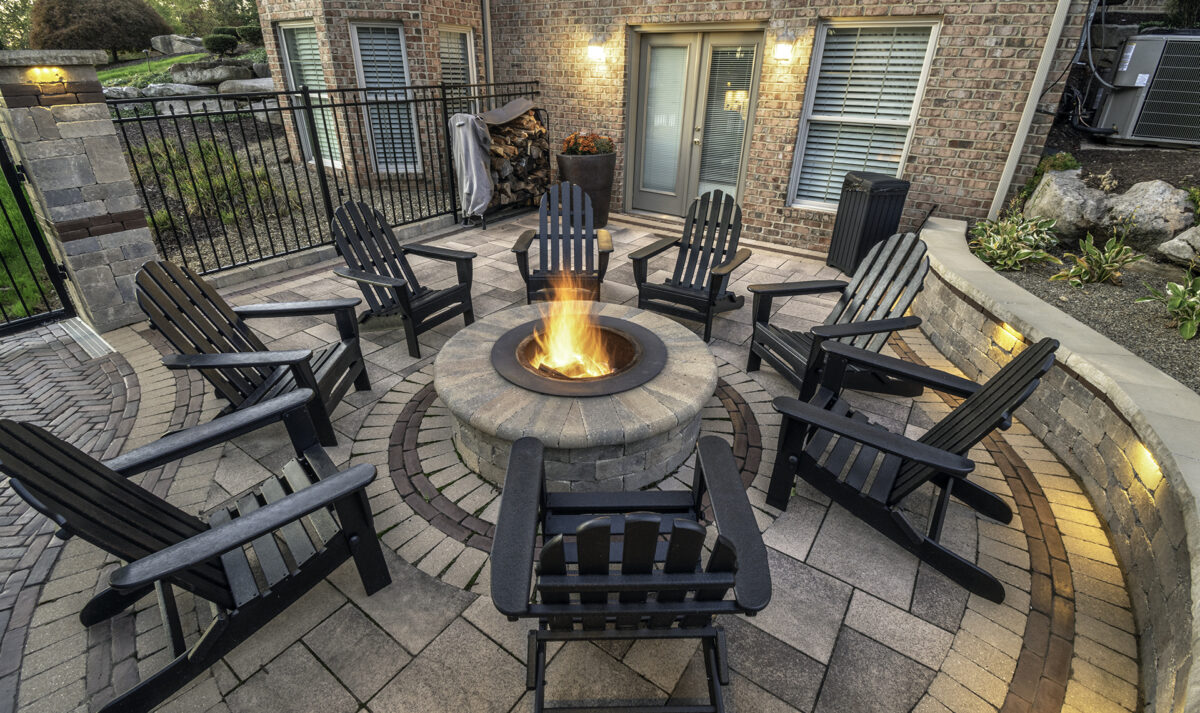 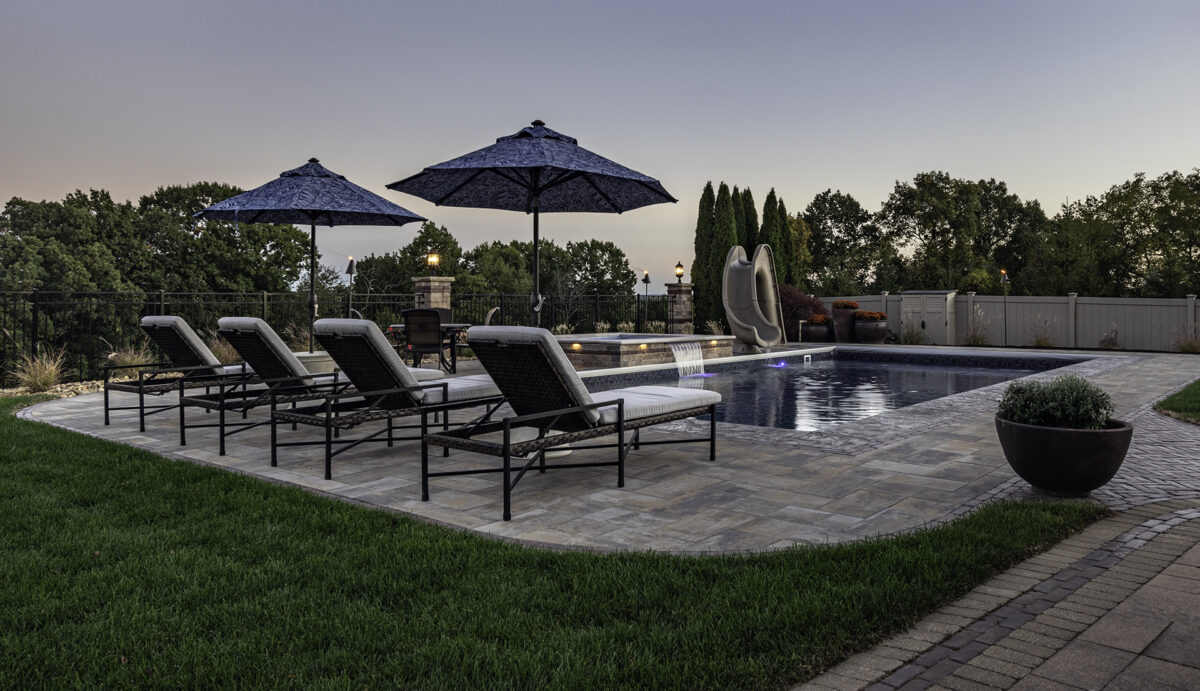 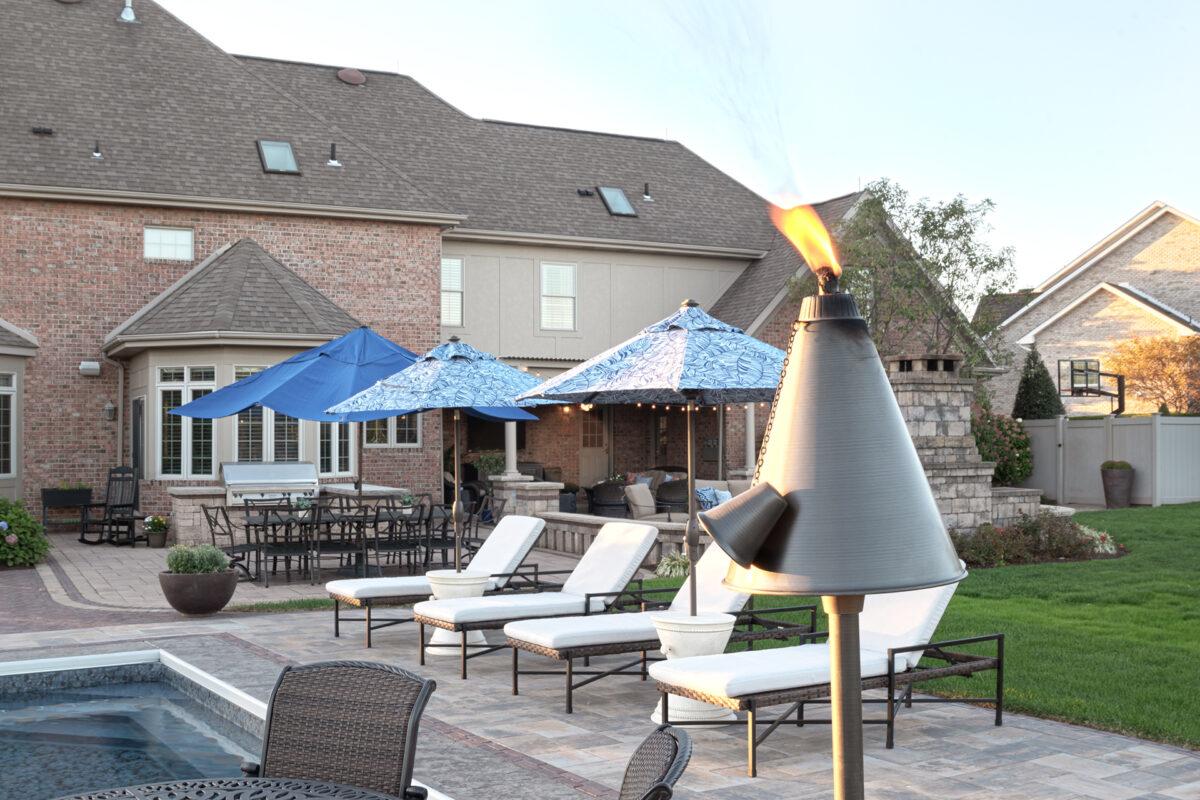 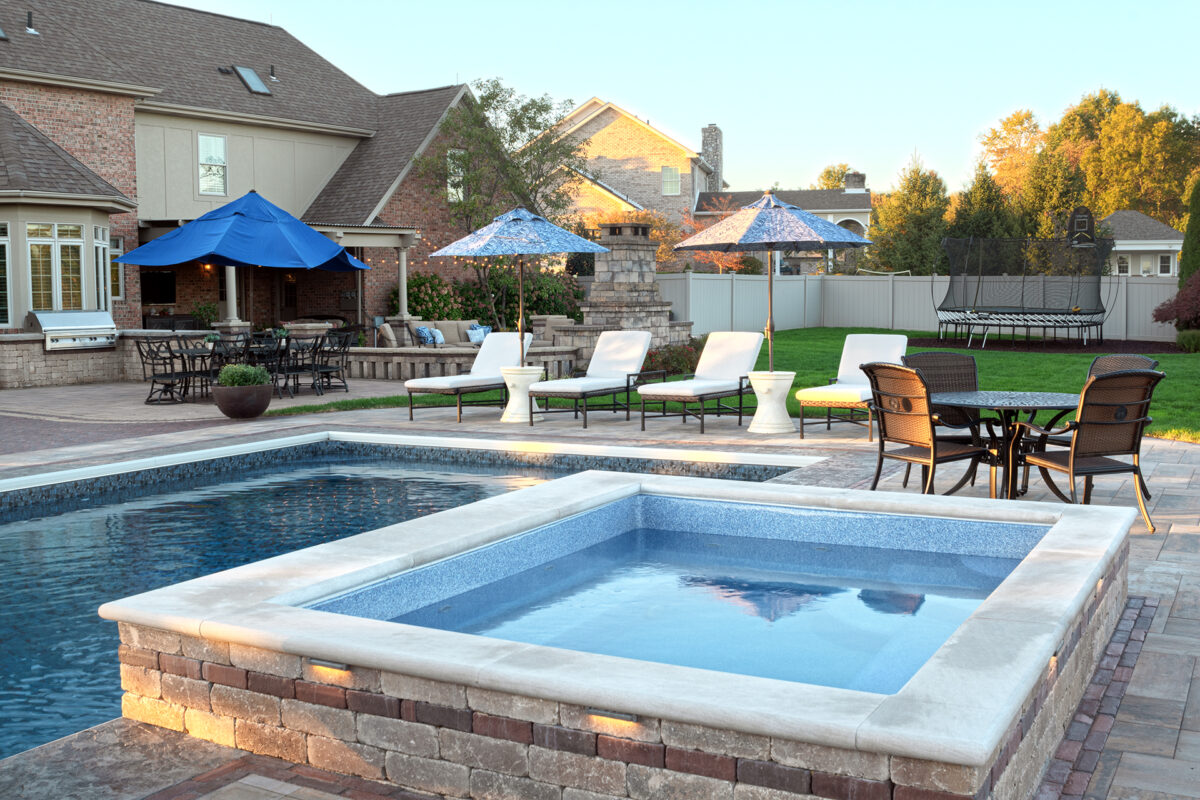 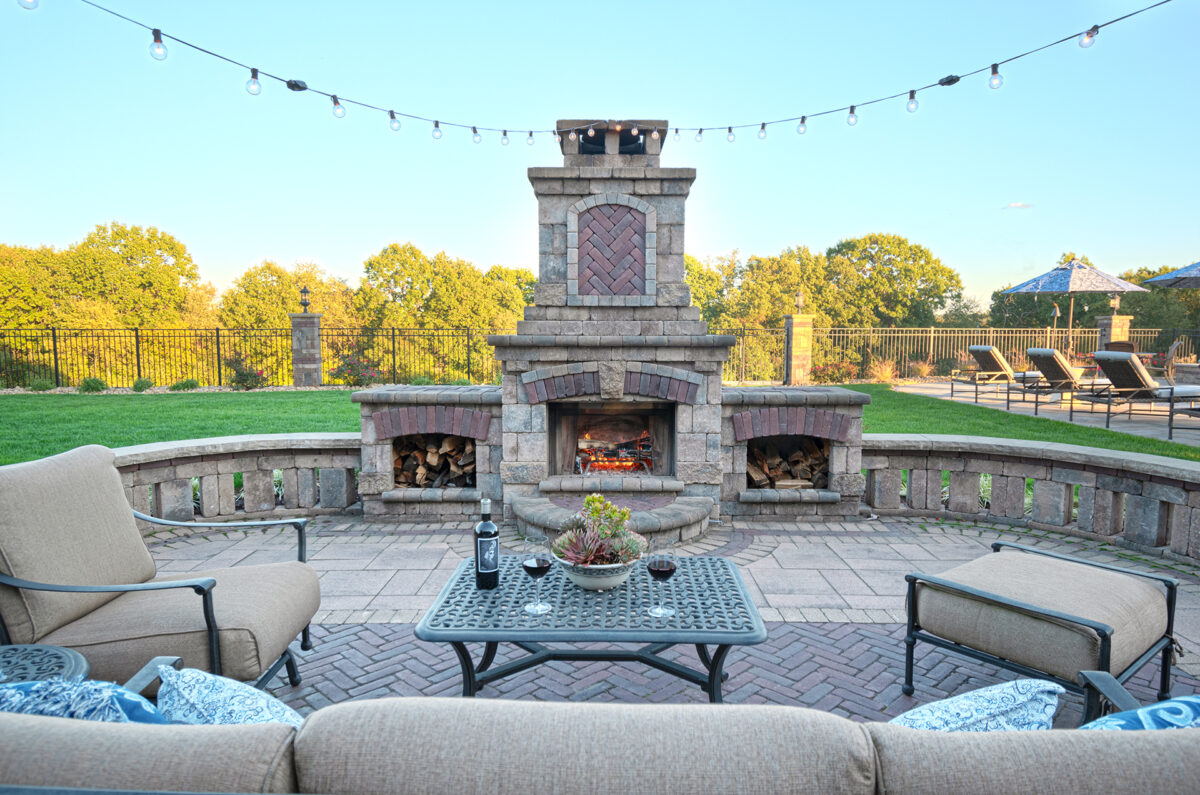 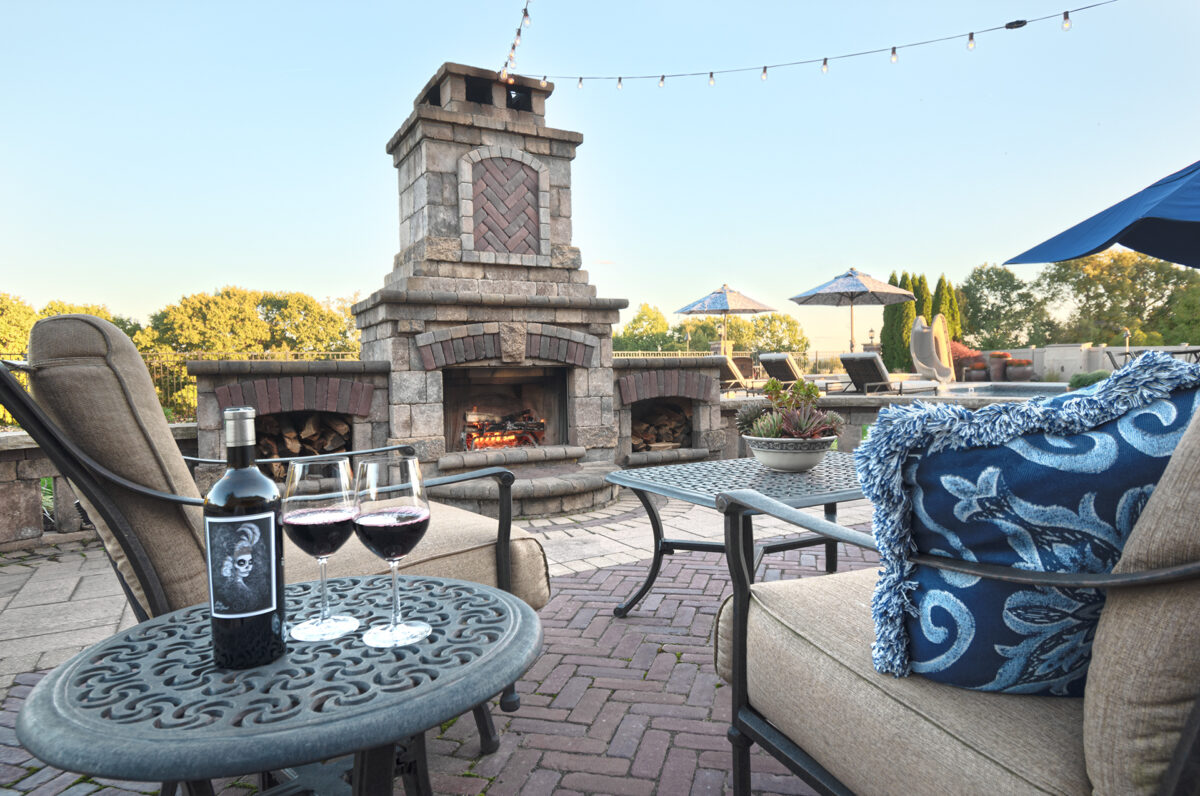 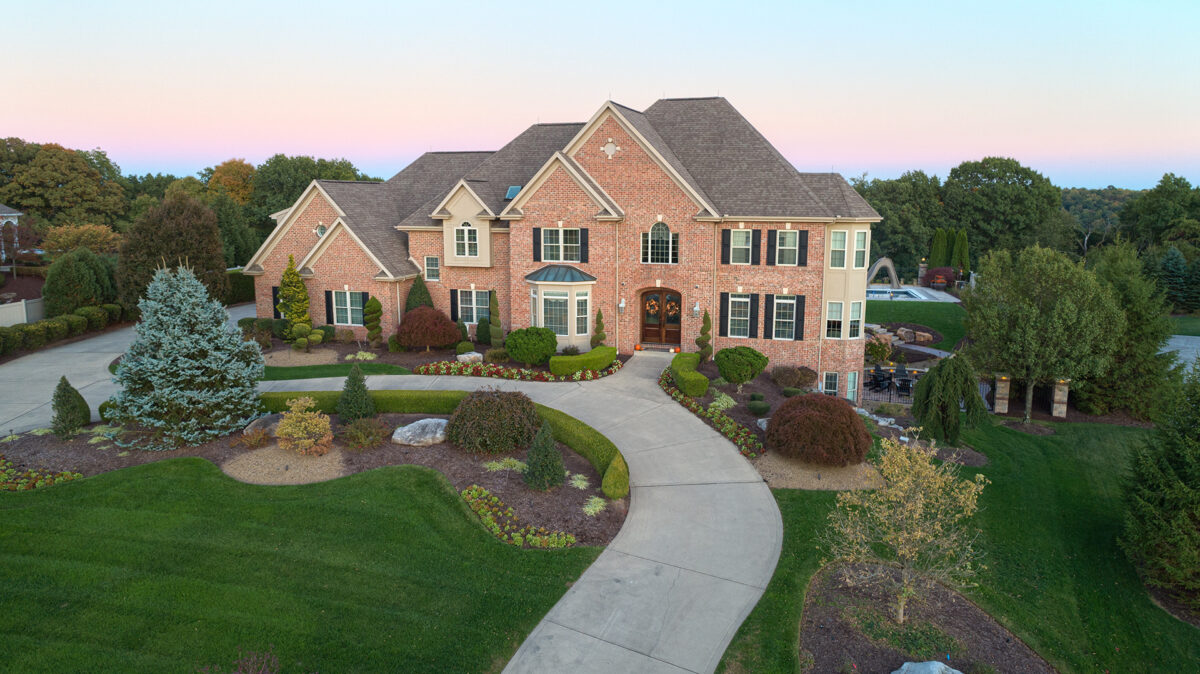 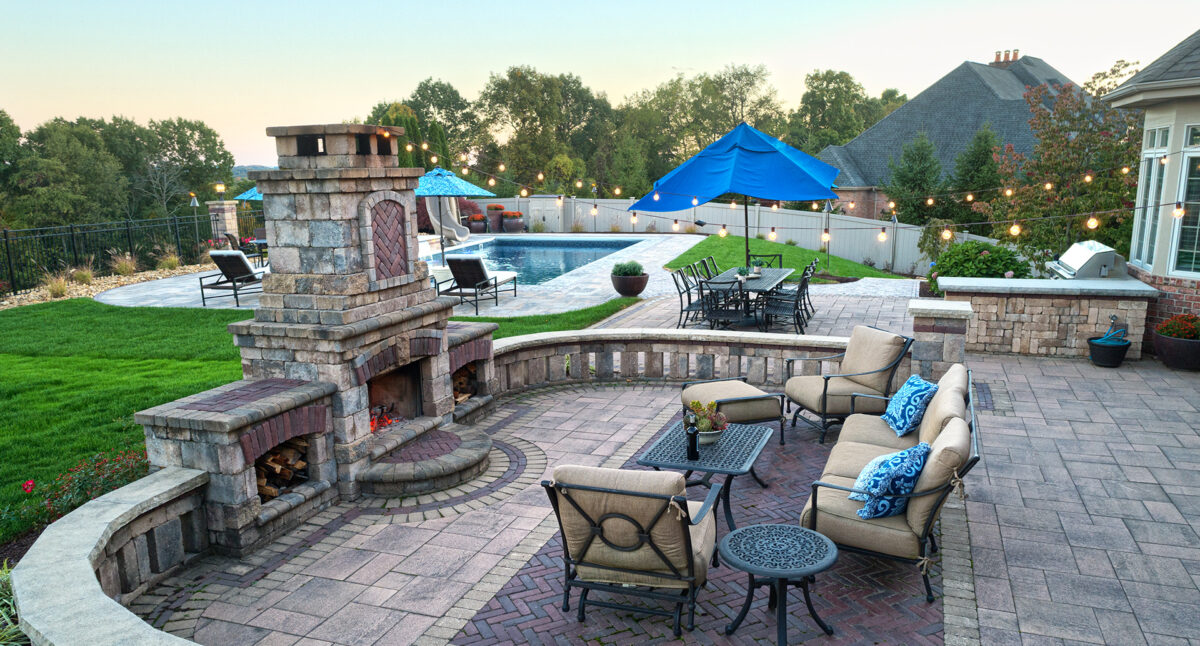 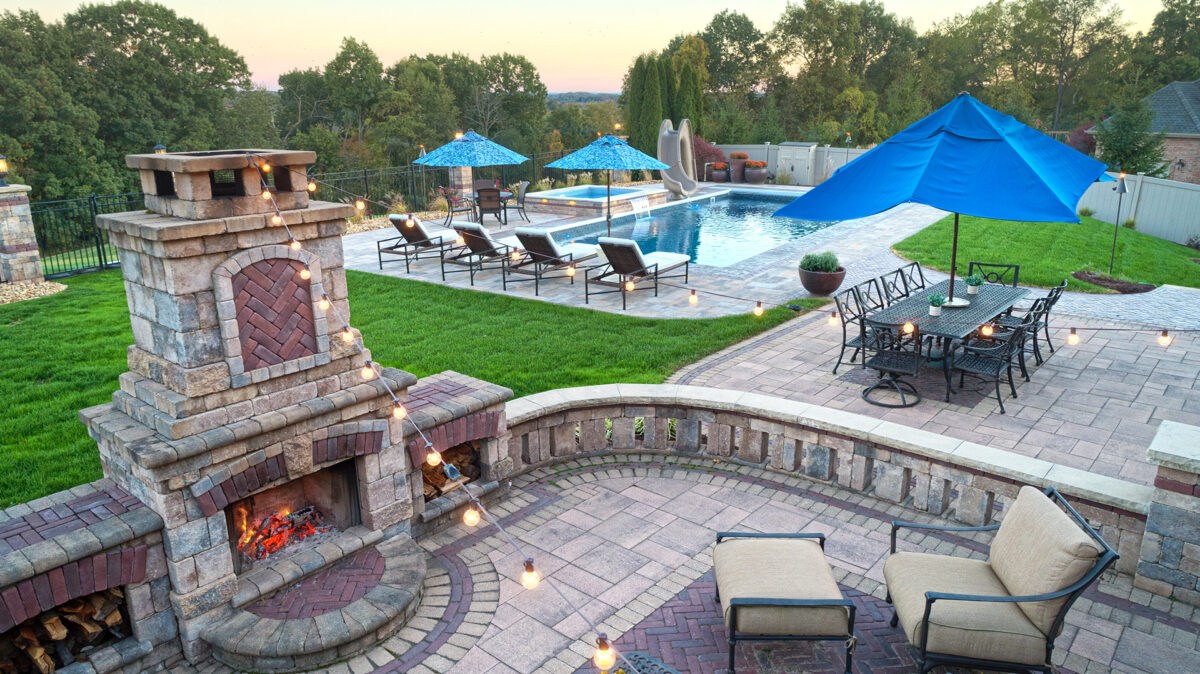 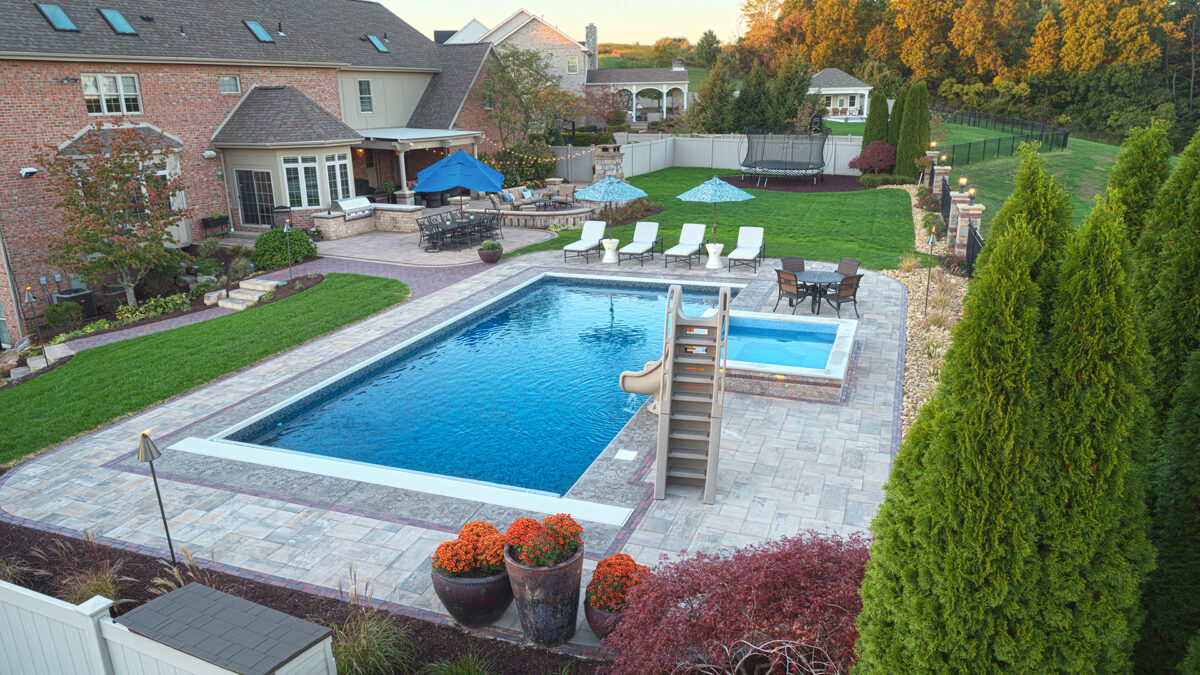 See more photos of this project on houzz.com

We will be publishing new featured projects as well as seasonal deals at our Nursery & Garden Center. Keep up-to-date by signing up here.

No Thanks, Don't Show This Again.

We use cookies on our website to give you the most relevant experience by remembering your preferences and repeat visits. By clicking “Accept All”, you consent to the use of ALL the cookies. However, you may visit "Cookie Settings" to provide a controlled consent.
Cookie SettingsAccept All
Manage consent

This website uses cookies to improve your experience while you navigate through the website. Out of these cookies, the cookies that are categorized as necessary are stored on your browser as they are essential for the working of basic functionalities of the website. We also use third-party cookies that help us analyze and understand how you use this website. These cookies will be stored in your browser only with your consent. You also have the option to opt-out of these cookies. But opting out of some of these cookies may have an effect on your browsing experience.
Necessary Always Enabled
Necessary cookies are absolutely essential for the website to function properly. This category only includes cookies that ensures basic functionalities and security features of the website. These cookies do not store any personal information.
Non-necessary
Any cookies that may not be particularly necessary for the website to function and is used specifically to collect user personal data via analytics, ads, other embedded contents are termed as non-necessary cookies. It is mandatory to procure user consent prior to running these cookies on your website.
SAVE & ACCEPT
Scroll to Top